Two interns from the University of Delaware presented information on two public restrooms planned for downtown. The presentation was the result of several public meetings where residents and businesses were able to give their opinions on the location, size and style of public restrooms.

“The purpose of this presentation is to provide an overview of everything there is to know as well as to hear feedback and address any concerns regarding the project,” explained Nate, one of the interns. “We’ll start with a rough timeline, then we’ll get into some basic proposals that we’ve developed with the help of public input, and then we’ll discuss the constraints around the project. And finally, we will provide additional information that we think will be useful to know.

The rough timeline for the new toilets began with a design process that would take approximately two months. The design would then be presented to council who would be able to provide feedback around the beginning of October. Once the design is approved, the project would be put out to tender, a process that could take around a month and a half. Once the bid is won, the construction of the project would take around two months, which means that the public toilets could be open around spring 2023.

“There were two basic options provided,” Nate explained. “One option was a single stall where the door is locked after one person enters or multiple stalls where more than one person could use it. An average of 2.29 stalls was decided by the public during our There is also the choice of having men’s and women’s toilets or all family toilets to make it easier for parents.

Another piece of equipment requested by the public was public water fountains or bottle fillers that could be attached to the front of toilets. Solar panels could also be attached to provide electricity and captioned cameras could be installed for security. There could also be timed locks on the doors that automatically lock them at a certain time.

“There are constraints to consider when it comes to toilet placement and construction,” Nate said. “There’s a $300,000 budget, environmental concerns posed by the floodplain, legal constraints and restrictions such as the Americans with Disabilities Act. There is also a limited space that the city owns as well as the public need. 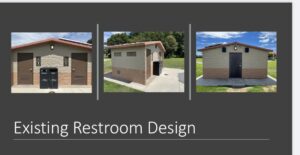 The toilets should be built close to the floodplain and in a downtown area, the floodplain is 9.4 feet with a valve that is nine feet away. It is possible that the city could fill in an area to install a toilet there, but that would require a considerable amount of fill. Also, the building would be a 10 by 20 foot building which presented additional problems since the restrooms had to be ADA compliant with ramps of a certain slope and width. Also, since several amenities are planned for downtown, including a pickle ball court, picnic pavilion, playground, and wading pool, the location of restrooms could be even more complicated.

“Brick is what makes up most of Milford’s architecture,” Nate said. “Concrete stamping uses concrete and stamps to create the look of brick, but it’s cheaper. In general, the public was in favor of a sturdy masonry material. Some members also talked about a decorative design on the outside like a mural. The proposed downtown restroom design is inspired by the Boys and Girls Club restroom near the Can-Do Playground.

“There’s nothing there right now,” Councilman Todd Culotta said. “So we can debate whether to go closer to Walnut Street or closer to the basketball courts, but as we grow and new courts are added, we can always add more if needed. In this moment, I think it’s important that we try to get something out there because things like the farmer’s market and events that are happening downtown, there’s nowhere to go to the bathroom.

Councilman James agreed, but wondered if the cost of adding a fourth stall was out of the question. Puddicombe said he didn’t think adding a fourth stand would be expensive. He explained that the current plan was to build a toilet with a second planned in the capital budget for 2025. Councilor Culotta pointed out that there was no ATM downtown either, asking if this was something to consider as the ATM fee would cover the cost of the ATM.

“We are working on another location,” said Mark Whitfield, city manager. “We’re looking at a kiosk for utility payments that could also double as an ATM, so that’s a whole other topic.”

Councilman Brian Baer pointed out that it could be beneficial to make all washrooms family washrooms, eliminating the need for men’s and women’s bathrooms. Mayor Archie Campbell said all bathrooms in the new police station will be unisex bathrooms. Councilor Fulton said these should be single cubicle bathrooms so anyone using them can lock the door behind them rather than blocked off bathrooms where men and women would use them together.

Puddicombe will present design options at an upcoming meeting for council and public feedback.

SAN FRANCISCO–(BUSINESS WIRE)–February 2, 2022– Dialpad, Inc., the industry leader in AI-powered communication and collaboration solutions for businesses of all sizes, today announced the expansion of its growing sales organization with the addition of Jim Nystrom as executive vice president of worldwide sales and Kent Venook as vice president. President of Global Sales Development. With […]

A day at Kent Monkman’s studio