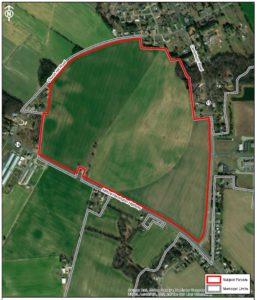 On Monday February 14, Milford City Council agreed to a memorandum of understanding between Tsionas Management and Emory Hill to provide professional services for a new industrial park planned for the Fry Farm. The city bought the farm, which is located at the corner of Milford Harrington Freeway and Canterbury Road, in December.

“One of the things that’s been talked about is the need to have a developer who can walk you through the process,” City Manager Mark Whitfield said. “Someone who has expertise in industrial developments as well as commercial properties. We reached out to a number of people to discuss it, both from other professionals and from other cities and the one company we kept coming back to was Emory Hill.

Deborah Tomasi, Executive Managing Director of Tsionas, provided insight into her company. She explained that Tsionas Management was founded in 1970 by Gus Tsionas with a mission to operate retail businesses.

“Under the leadership of his daughter, Angela, the business has grown into a well-established property investment and management company,” said Tomasi. “We currently own and operate over 700,000 square feet of retail space in the State of Delaware including Milford Plaza and have acquired and developed an extensive portfolio which includes the University of Delaware. We are currently actively developing a state-of-the-art housing center for 200 students which will be a campus within a campus.

Tomasi said Fry Farm’s goals are aligned with Tsionas Management’s investment goals. They chose Emory Hill as their partner because they had been very successful in developing industrial areas. Clay Hall, director of property management, and Neil Killian, director of brokerage, also spoke to the board about Emory Hill’s qualifications.

“Clay Emory, one of our founding partners, was born and raised in Milford,” Hall said. “He graduated from Milford High School. He comes from a family of dentists in Milford. Some of you may know Bob Emory, perhaps sitting in his dental chair. Carmen Facciolo is another of our founders. He and his family built the Mllford Post Office in the 1960s. We are Delaware developers and operators through and through. Approximately 85% of our business and operations are located in Delaware. »

Hall said Emory Hill has built a wide range of businesses, including Wawa’s, Goodwill’s, banks, research facilities, shopping malls and more. He said the company is planning a high-end, attractive industrial park that will bring good businesses and good employers to Milford.

“An example of an industrial park, one that most would consider Delaware’s preeminent industrial park, is the Pencader Industrial Park in Newark,” Hall said. “It’s a 350-acre business park that we developed in the mid-1980s. It has 43 plots that we subdivided. We’ve been involved from the start, which makes it very parallel to what we’re talking about tonight. We still own and manage ten of these buildings. The types of buildings constructed there range from heavy industrial to flex to office and lab. It is a very dynamic park, very well managed and of high class. We envision the same for Milford.

Killian provided a list of buildings Emory Hill had been involved in over the years, including JC Penney, Wilmington Trust and ChemLawn, Discover Card, Federal Express, TD Bank and more. Killian explained that the vision for the Fry Farm included a large bay, a modern warehouse and single-storey offices and laboratories. Councilman Jason James thanked Hall, Killian and Tomasi for their presentation.

“You shared some of the Delaware connections, even Milford connections,” Councilor James said. “It’s important because we know they know the characteristics of the nature of the city’s desire and what we’re trying to accomplish. This is a very significant thing that is very important. Milford may not have a lot of money, but the people of Milford spend money. It will present an excellent environment for our citizens and those who come. I heard you say something about your approach to your investment or building facilities, and I know we’re not going to be very specific because we’re at a very early stage, but what is your general plan for develop these sites? ”

Killian said the original aim of Emory Hill was to provide expertise in industrial park planning because in their experience that was the essential part.

“Clay mentioned our Pencader Park and our involvement there,” Killian said. “The story of this park is that we were hired, actually selected, by the Shriner Hospital for Disabled Children when the land itself was virgin. So we were involved in the planning of this park from day one. And that’s why we feel so passionate about it. We really believe in the success that’s happened there, and we think it’s essential in this case, that the same kind of thinking goes into the planning of the whole park.

“I think this decision on a business park, the first time we decided where to put it, find a location, acquire the land and get to that point,” Councilor Culotta said. “My personal opinion, this is probably the biggest decision to see. I look forward to working with partners who will help us get there. They are vital. I really want to congratulate Mark and his team for bringing us to this point.

“That’s why we really want to be involved in these early stages,” Killian said. “What we believe has led to the overall success of Pencader are some of the restrictions and design elements that have been put in place that have stood the test of time. We use the park as an example because we truly believe it is the most responsible in our industry. There are design elements and architectural features that are required. Just to give you a few examples, there are limits on outdoor storage, trailer parking, different types of uses, and landscaping and frontage requirements so we don’t have any buildings that age and deteriorate over time. It just maintains one element and one. Aesthetics that encourage investment.

Councilor Katrina Wilson also thanked the presenters for providing the council with their connection to Milford and Delaware.

“I remember Dr. Emory,” Councilor Wilson said. “My mum loved him as a person, so close and dear to my family. I’m sitting here thinking I’ve been here a very long time. And the first thing that came to mind was “you had to crawl before you could walk. And saying that, we started with our first activity park and there were a lot of hiccups along the way. Hearing your presentation, that’s how you know that we have grown as a city and in this body that is here today. This will allow us to make the wisest decision based on our past experiences. Now, saying all this, we are proud of what we have done over the past 30 years and how we’ve handled that growth I think it’s great that we have the expertise of all of you, a different level of expertise so that we can make an informed decision at as we move forward.

Mayor Archie Campbell said he thinks neighbors surrounding the Fry Farm are concerned about heavy manufacturing versus distribution centers. Councilman Wilson felt it would be a mistake to limit the city in any way.

“This is an opportunity we can seize that will benefit our town for years to come with an influx of business,” Councilor Wilson said. “I really want us to stay because you’re in different styles and in different types of businesses that might come in, so I’m just afraid it’s the manufacturer or whatever, because I don’t want to limit us. people say we’ve become a medical town and now it’s an opportunity for us to be an industrial manufacturing town, we want it all as long as it’s well run.

Hall explained that the idea from the start was to be flexible with the design at this point. He said Pencader had changed industrially over the past few years and no one had anticipated the recent surge.

“Not only do we need to be flexible, we need to be open to Delaware businesses that might want to expand or relocate here, but also to national businesses on the east or west coast that might want to expand or relocate,” said Lobby. “There was a time when we were the largest owner of DuPont and more recently ChristianaCare before they moved to a consolidated campus. So when it comes to who wants to be in Milford there isn’t a type of organization or industry or size that we haven’t worked with between Tsionas and Emory Hill so we’re comfortable working with everyone when they come here and presenting them to you as opportunities to consider.

The Board unanimously approved the Memorandum of Understanding.

Campus & Community Dear members of the Orange community: I write today as the world watches, with great concern, news reports from Ukraine with horrific images of airstrikes, bombings, gunfire and fleeing citizens. At the University Senate meeting on Wednesday, I shared that part of my role as Chancellor is to anticipate and prepare for […]

A rendering of the new Bryant Manor, seen from the corner of Yesler Way and 19th Avenue E in Seattle. (Credit: First AME Housing) This edition of Housing Notes will explore some particularly ambitious projects underway in the Puget Sound area. It’s also worth noting for starters that some indicators suggest that the housing market […]

By Catherine Sweeney The King County multifamily market continues to see increased sales activity as residential assets are purchased throughout the Puget Sound area. In a deal reached on June 1, San Diego-based real estate investment and development firm ColaaRich acquired the 177-unit CityZen Commons in Kent for $51.9 million, or about $293 $220 per […]